Mike Roman, a Missouri man who overcame the loss of a leg to become a race car driver and an inspirational symbol for millions of people who suffer from chronic pain, died March 28 from cancer. He was only 45, but friends say he lived a life far beyond his years – by reinventing himself after a personal tragedy.

In 1994, Roman tore a ligament in his right knee while playing basketball. While undergoing arthroscopic surgery to repair the knee, he contracted a severe staph infection. To stop the infection from spreading, doctors amputated his leg above the knee, the first of dozens of surgeries that left him with Phantom Limb Pain, a painful disorder that many amputees suffer after their limbs are removed. Roman's entire right leg was eventually amputated in an unsuccessful effort to control his chronic pain.

"I was stuck in hell," is how Roman described the next dozen years in an interview for a film made about his life. He became addicted to painkillers and could not get out of bed for more than a few hours at a time. Roman was so depressed, his wife Susy worried he would kill himself. "I became this angry drug dependent guy who lived in my bedroom and terrorized the kids. And that was from chronic pain," Roman recalled in that same interview.

Roman agreed to try a spinal cord stimulator called Precision Plus to control his pain. The stimulator, when implanted along the spinal cord, "tricks" the brain into feeling pain as a soothing or tingling sensation. "He turned it on and the pain stopped. I was overcome with joy," said Roman.

His life suddenly restored, Roman overcame his addiction and became a spokesman for The Race Against Pain, an educational outreach program of Advanced Bionics and Boston Scientific, the manufacturer of his pain device. He began touring the country and sharing the story of his personal battle against chronic pain. Roman testified before Congress, worked with disabled veterans in the Wounded Warrior Project and became a motivational speaker. 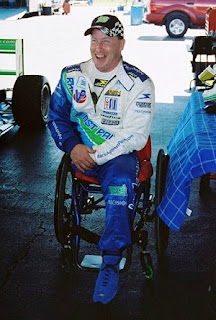 "I would say that Mike Roman was the only person on this planet who could become the face of chronic pain because it required someone not only of great passion, but the determination, the character, the integrity, the adrenaline and the drive to not stop until pain was recognized," says Doug Lynch, the former director of market development for Boston Scientific, who called Roman the "ambassador and voice" for 116 million Americans who suffer from chronic pain.

"He was one of the very few people who were fortunate to escape pain and his mission was to help that next person and he did it. He did it one city at a time. He did it in meetings with one person or two people. And he did it before large audiences," Lynch told American News Report.

"Dreams come true if you have the courage to dream them," Roman would tell audiences.

Roman fulfilled a dream of his own – by becoming a race car driver – and setting six land-speed records for a disabled driver. He also competed in the Los Angeles Marathon, carried the torch in the 2002 Winter Olympics and qualified as a bobsled driver in the U.S. Paralympic Winter Games. Until his recent illness, Roman was hoping to compete in the 2014 Paralympic Winter Games in Sochi, Russia.

Roman's story was so compelling, producer-director Larry Confino decided to share it in a documentary called "Racing Roman."

"Over the course of making "Racing Roman" I discovered it became almost impossible for me to complain about anything in my life. The daily obstacles of my life seemed trivial in comparison to what he'd been through. If Mike could overcome the adversity he'd experienced, improve himself as a man, move forward and live out his childhood dreams, then all negativity was off the table," recalls Confino. "It was almost impossible to absorb the wide range of emotion he'd experienced in his life. His love of adrenaline and competition. His deep, unwavering love for Susy and his family. His profound sense of loss. His downward spiral into depression. But then finding the inner strength to come back, to reinvent himself and be a better man than he'd been before."