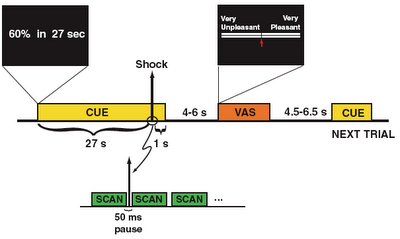 You hate needles, but you ought to get a flu shot. So what do you choose--one injection or the possibility, months later, of 2 weeks in bed feeling terrible? These so-called intertemporal choices present a trade-off between two outcomes that might occur at different times. Now researchers have added a new insight into how people make decisions like this one: The dread that lingers before something bad--a nasty flu, say--can sway the choice.
Economists study intertemporal choice to predict behavior in various scenarios, but they only recently have begun to consider whether anticipation or dread might affect decision making. Neuroscientist Gregory Berns of Emory University in Atlanta, Georgia, and his team, for example, have turned to brain scanning.
First, they put volunteers into a brain scanner and gave them something to dread: an electric shock to their feet. In the first part of the experiment, the 32 subjects were informed when the shock was coming and how big it would be. In the second part, they could choose between a big shock with a short time delay, or a smaller shock that they had to wait longer to experience.
Nine subjects went for more pain right away to avoid the agony of waiting. The functional magnetic resonance imaging showed heightened activity in the area of the brain responsible for perceiving pain, specifically in the region that pays attention to stimuli. In other words, these extreme dreaders focused so much on the impending shock that the wait was as unpleasant as the shock itself, Berns explains. Twenty-three were willing to wait longer for a smaller shock, and the same part of their brains showed no spike in activity. The team publishes their results in the 5 May Science.
"This paper gives a much richer understanding of intertemporal choice", says behavioral economist George Loewenstein of Carnegie Mellon University in Pittsburgh, Pennsylvania. By taking into account people's motives when making choices, economists will be better able to understand the decisions that people make regarding money, and also healthcare, he explains.
http://www.ccnl.emory.edu/greg/Berns%20Dread%20Science%202006%20Final.pdf
Posted by Gary at 10:18 AM