Want to know an effective way to reduce pain from burns? Cover the affected red area, so you are unable to look at it. Ideally, use a blue bandage. Painfully hot stimuli applied to red skin feel more painful than applied to blue skin, a new research article published in Frontiers in Human Neuroscience shows.

The scientists, Matteo Martini, Daniel Perez-Marcos and Maria Victoria Sanchez-Vives from  the University of Barcelona, used immersive virtual reality in combination with the application of real heat stimuli to the wrists of experimental subjects. Participants saw their virtual arms get increasingly red, blue, or green as the heat rose, and indicated, by pressing a button, when the sensation became painful. In an additional experimental condition, a gray dot close to the virtual arm became red as the temperature increased, but the color of the arm itself remained unaltered. 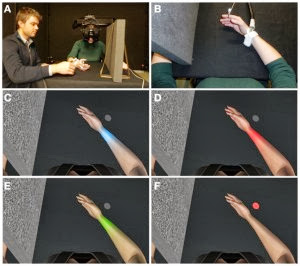 The experimental set-up and the four experimental conditions. The participant saw the virtual environment through a head mounted display. When the participant felt the heat stimulation as painful, she stopped the stimulation by pressing a button with the other hand (A). The participant's arm resting on the table matches the avatar's posture (B). First-person perspective view of the avatar while the skin color changed into blue (C), red (D), or green (E). In the fourth condition, the skin of the virtual arm did not change color but a gray spot on the table turned into red (F).

The results showed that subjects experienced pain earlier (that is, at lower physical temperatures) when the arm was red than when it was blue. 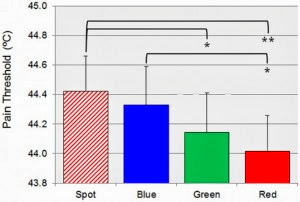 Also, the experience of increased pain was not associated to seeing red per se, but it mattered whether the color was on the body or not. A patch of red near –but not on– the virtual arm resulted in significantly less pain than that recorded with the arm itself becoming red.

So much for looking at life through rose-colored glasses.